Zoom Lecture: “Common Misconceptions about the History of Eugenics in Romania”, 4 May, at 15.00 Bucharest 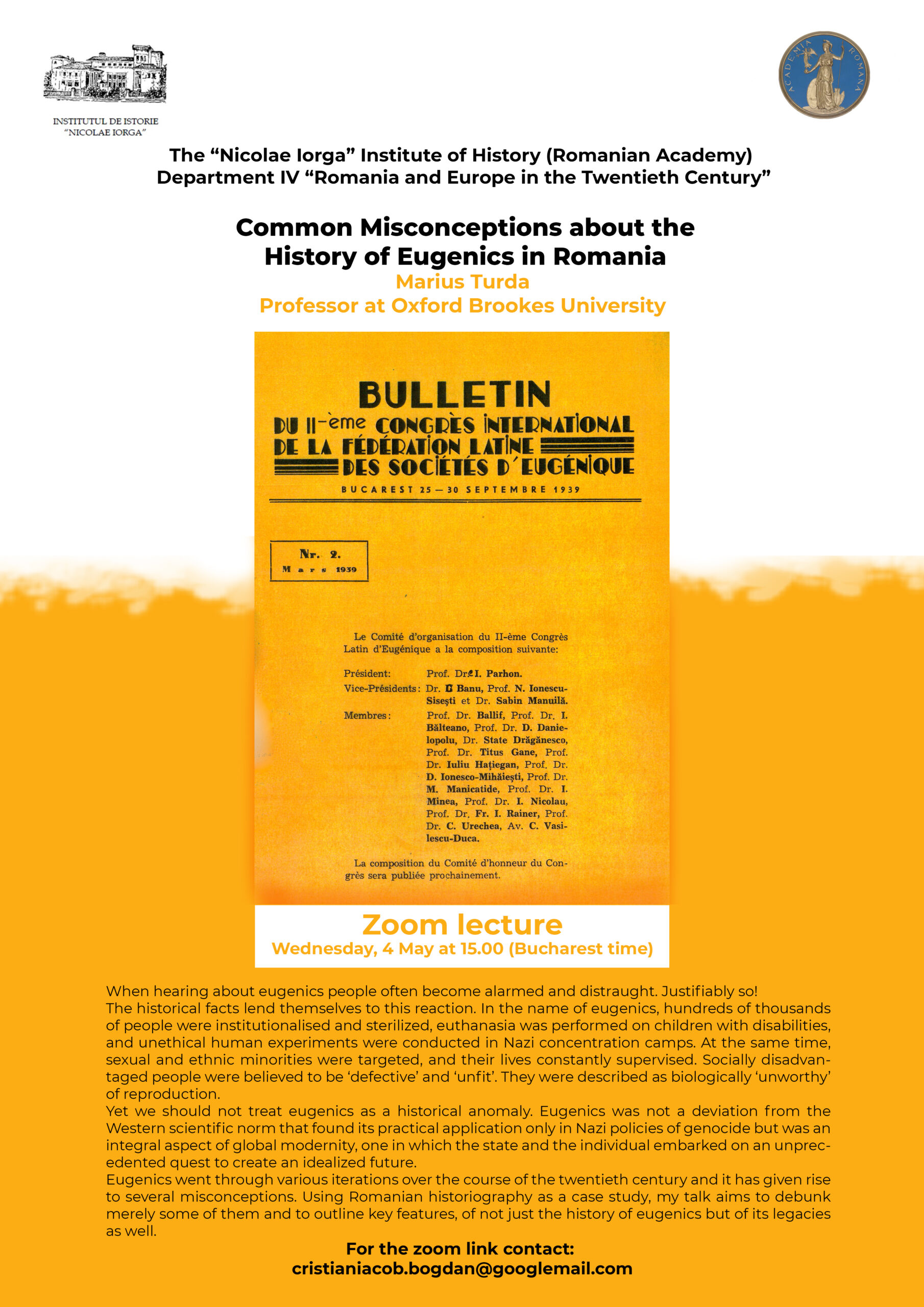 The Nicolae Iorga Institute of History of the Romanian Academy is kindly inviting us to the conference Common Misconceptions about the History of Eugenics in Romania, given by professor Marius Turda (Oxford Brookes University) on Wednesday, 4 May 2022, at 15.00 Bucharest time, via Zoom.
For Zoom credentials, please contact cristianiacob.bogdan@googlemail.com

When hearing about eugenics people often become alarmed and distraught. Justifiably so! The historical facts lend themselves to this reaction. In the name of eugenics, hundreds of thousands of people were institutionalised and sterilized, euthanasia was performed on children with disabilities, and unethical human experiments were conducted in Nazi concentration camps. At the same time, sexual and ethnic minorities were targeted, and their lives constantly supervised. Socially disadvantaged people were believed to be ‘defective’ and ‘unfit’. They were described as biologically ‘unworthy’ of reproduction.

Yet we should not treat eugenics as a historical anomaly. Eugenics was not a deviation from the Western scientific norm that found its practical application only in Nazi policies of genocide but was an integral aspect of global modernity, one in which the state and the individual embarked on an unprecedented quest to create an idealized future.

Eugenics went through various iterations over the course of the twentieth century and it has given rise to several misconceptions. Using Romanian historiography as a case study, my talk aims to debunk merely some of them and to outline key features, of not just the history of eugenics but of its legacies as well.

Marius Turda is professor at Oxford Brookes University and director of the university’s Centre for Medical Humanities. He was the founding director of the Cantemir Institute at the University of Oxford (2012-2013) and is the founder of the Working Group on the History of Eugenics and Race established in 2006 in Oxford. He has published extensively on the history of eugenics, race and racism. Among his most important publications are Historicizing Race: A Global History (co-author with Maria Sophia Quine) (2018); Eugenics and Nation in Early 20th Century Hungary (2014); Latin Eugenics in Comparative Perspective (co-author with Aaron Gillette) (2014); Modernism and eugenics (2010). He (co-)edited numerous books, most recently the six-volume anthology A Cultural History of Race (2021). Marius Turda has curated three exhibitions on the history of eugenics and is currently leading the public history project “Confront Eugenics” (www.confront-eugenics.org).