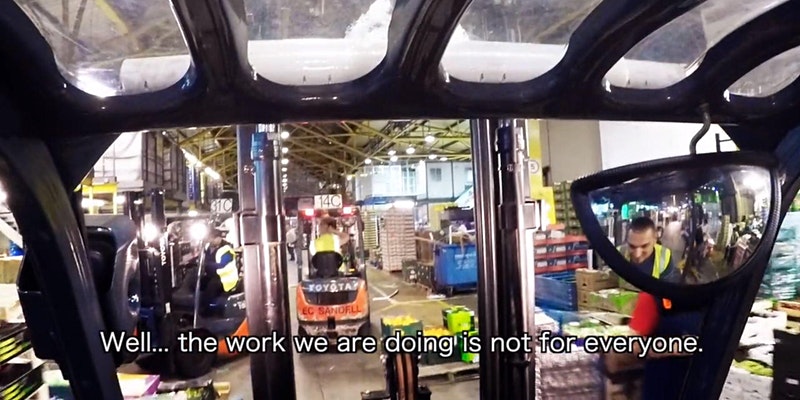 Their conversation will explore their research into night shift workers in London and the U.S., from the physical, emotional, and mental toll of those working “graveyard shift” to the states of (dis)appearance, (in)visibility, and aspiration of the Filipinx diaspora working in hospitals in LA. This conversation will be moderated by Ann Lui, principal at Future Firm.

This conversation will be hosted both online on Zoom and in-person at Midnight Palace, 323 Brown St., Columbus, IN. Participants are welcome to join online or on the sidewalk. Zoom links will be provided to registered participants.

Nightworkshop is a project set up to research migrant night workers in cities. It uses mixed methods to capture and make visible the hidden lives of night workers. The short films, photo collections and podcasts zoom into aspects specific to lives spent in physical labour at night. By building a bridge between the researcher, the protagonists and the audience, the exhaustion, embodied precarity and the hidden nature of night work appear in the spotlight.

Cyrus Peñarroyo is a Filipino-American designer and educator whose work examines architecture’s entanglement with contemporary media and digital culture. More specifically, his research investigates the urbanity of the Internet – how networked technologies shape urbanization and how media spheres influence built environments. He is an Assistant Professor at University of Michigan Taubman College of Architecture + Urban Planning, where he was the 2015‑16 William Muschenheim Fellow.