European NetIAS Lectures Series: Knowledge in the Digital Age, every last Thursday of the month*, at 5 PM (CET), via Zoom [First Semester] 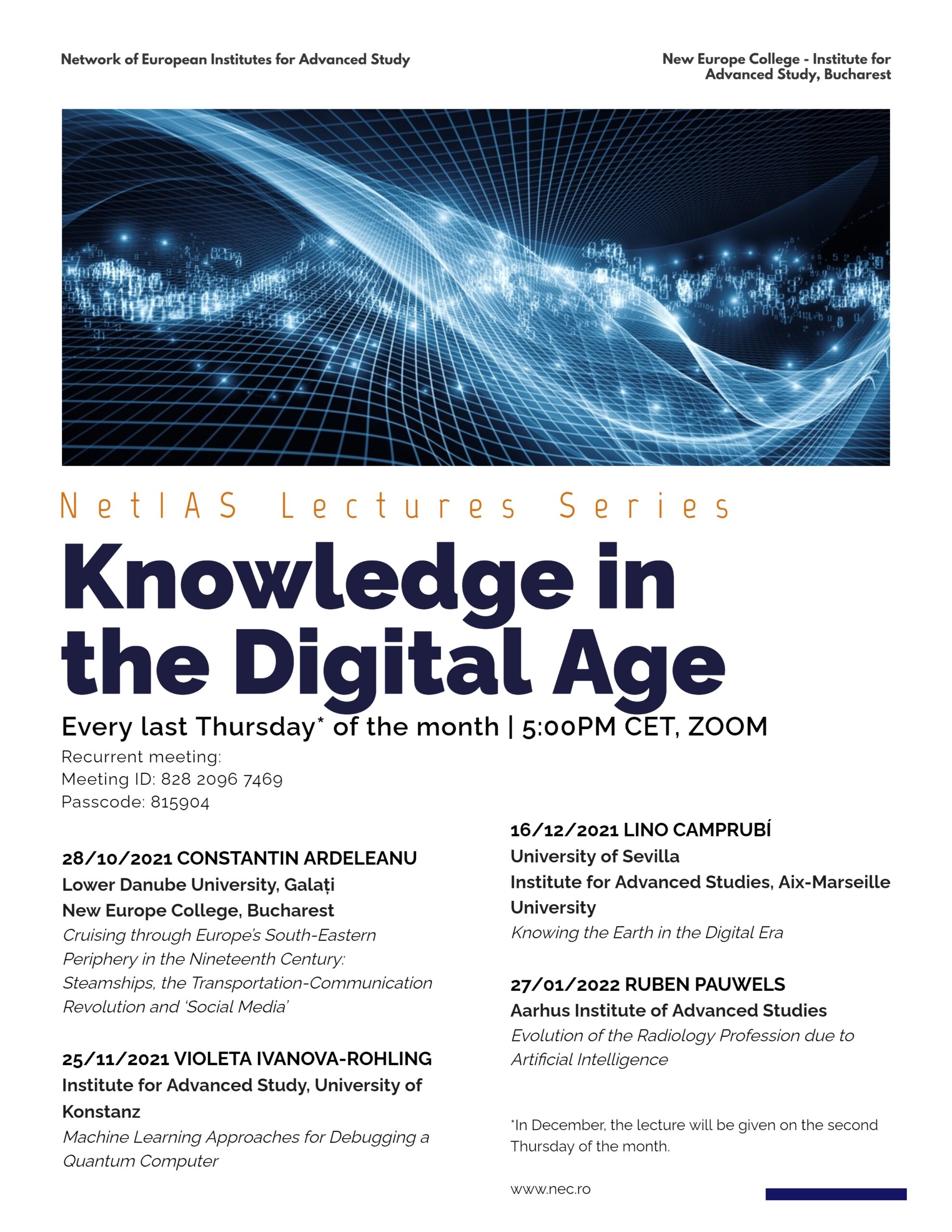 New Europe College announces the launch of a series of conferences organised in collaboration with NETIAS (Network of European Institutes for Advanced Study). Researchers from different fields and from various European centres invite us – every last Thursday of the month – to reflect on knowledge in a digital age.
*In December, due to the winter holidays, the lecture will be given on the second Thursday of the month.

Login details below are valid for every lecture.

Program  for the fall semester

The advent of steamships on the world’s rivers and seas revolutionized economic, political, and cultural realities wherever they started plying. Steamships served as agents of modernization that galvanized regional and global mobility with their ability to convey passengers and cargo relatively inexpensively, rapidly, and safely. This paper aims to turn steamships into arenas of global history and explore the social dimension of cruising by looking at the sociality engendered by the coming of the transportation revolution to the Black Sea and the Eastern Mediterranean. While gliding along a politically disputed borderland that separated – and connected – the Austrian, Ottoman, and Russian empires, steamships themselves became busy platform where voyagers from all corners of the globe engaged in various social exchanges.

In the past decades, the mounting evidence that quantum algorithms can solve specific tasks with efficiency beyond the capability of a state-of-the-art classical computer has attracted tremendous interest in the field. A turning point was Shor’s algorithm for prime factorization, a polynomial quantum algorithm solving a problem that is hard for classical computers. A fully functioning all-purpose quantum device would have an enormous impact on our lives, with applications in science, drug discovery, disaster preparedness, space exploration, and environmental sustainability among many others. As a consequence, an increasing number of countries and companies are investing billions of dollars in a race to produce and commercialize the quantum computer. Various physical systems for quantum computation have already been developed, and hybrid quantum algorithms, which aim at solving optimization problems more efficiently, can run on existing noisy intermediate-sized quantum devices. However, a full-size general-purpose quantum computer is still out of reach. One of the difficulties in developing such a device is that as the size and complexity of the quantum computer grow, more sophisticated techniques for calibration and evaluation of their performance are required in order to develop fault-tolerant devices. Quantum state tomography (QST) is a prominent technique for the verification of a quantum computer, which allows for the reconstruction of a given quantum state from measurement data. By providing comprehensive information for a given quantum state, QST is known as the “gold standard” for the verification of a quantum device, however, its computational costs, make it infeasible for a system larger than few qubits. Moreover, it can be time consuming even for small systems, i.e. building blocks of a quantum computer of only one or two qubits. Efficient QST would be an important step to making a general-purpose quantum device possible. One aspect of the efficiency of the QST procedure depends on the choice of the measurement scheme, which determines the number of measurements one needs to do in order to perform the QST. Finding a measurement scheme that minimizes the number of required measurements can be formulated as an optimization problem. My work is focused on applying and developing various optimization and machine learning methods with the goal of finding measurement schemes, which minimize the number of measurements needed. By using prior knowledge of the landscape of potential solutions, such as particular symmetries and invariances, one could improve the exploration of the search space and find the optimal measurement schemes.

16/12 LINO CAMPRUBÍ
Knowing the Earth in the Digital Era

In the popular imagination, earth and environmental scientists are adventurous explorers ready to fight the elements in the field, the mountain peak, the dark cave, or the blue ocean. This naturalist type still exists in real life. But much of the knowledge generated about the Earth in the last decades has come from remote sensors gathering and processing data that scientists then look to from their computers. What is lost and what is gained? In this conference, I will explore this question historically and philosophically with special attention to the role of digital and satellite data in ocean sciences.

In this talk, a particular example of ‘Knowledge in a Digital Era’ will be discussed. Digitization of medical imaging started well over 30 years ago, and is still on-going. Within this time-span, certain innovations did not require a significant adaptation in radiological know-how (e.g. photostimulable phosphor plate), whereas other technologies required significant adaptations of training curricula and/or additional post-graduate certification (e.g. CT, MRI). Currently, artificial intelligence (AI) is revolutionizing the radiological landscape. Following the development of highly performant algorithms for deep learning, along with the ever-increasing computational power available to us, the use of AI for diagnostics as well as image processing has been explored. While the development of clinical AI tools is very much a work in progress, the hype around AI has already raised several questions regarding its impact on the radiological profession. Although it is generally believed that radiologists will not become obsolete any time soon, and that the ultimate responsibility for a patient’s diagnosis and treatment will remain in human hands, several questions can be raised regarding the effect of AI on the required knowledge and competencies of future radiologists. Most of the current perspectives regarding the use of AI in radiology are somewhat simplified and static, and focus mainly on the ways in which AI can enhance the diagnostic workflow (‘augmented radiology’). The reality, however, may be much more complex and dynamic, and may require a significant alteration to the training requirements of radiologists or, perhaps, the inception of an entirely new profession.

Program and abstracts in PDF