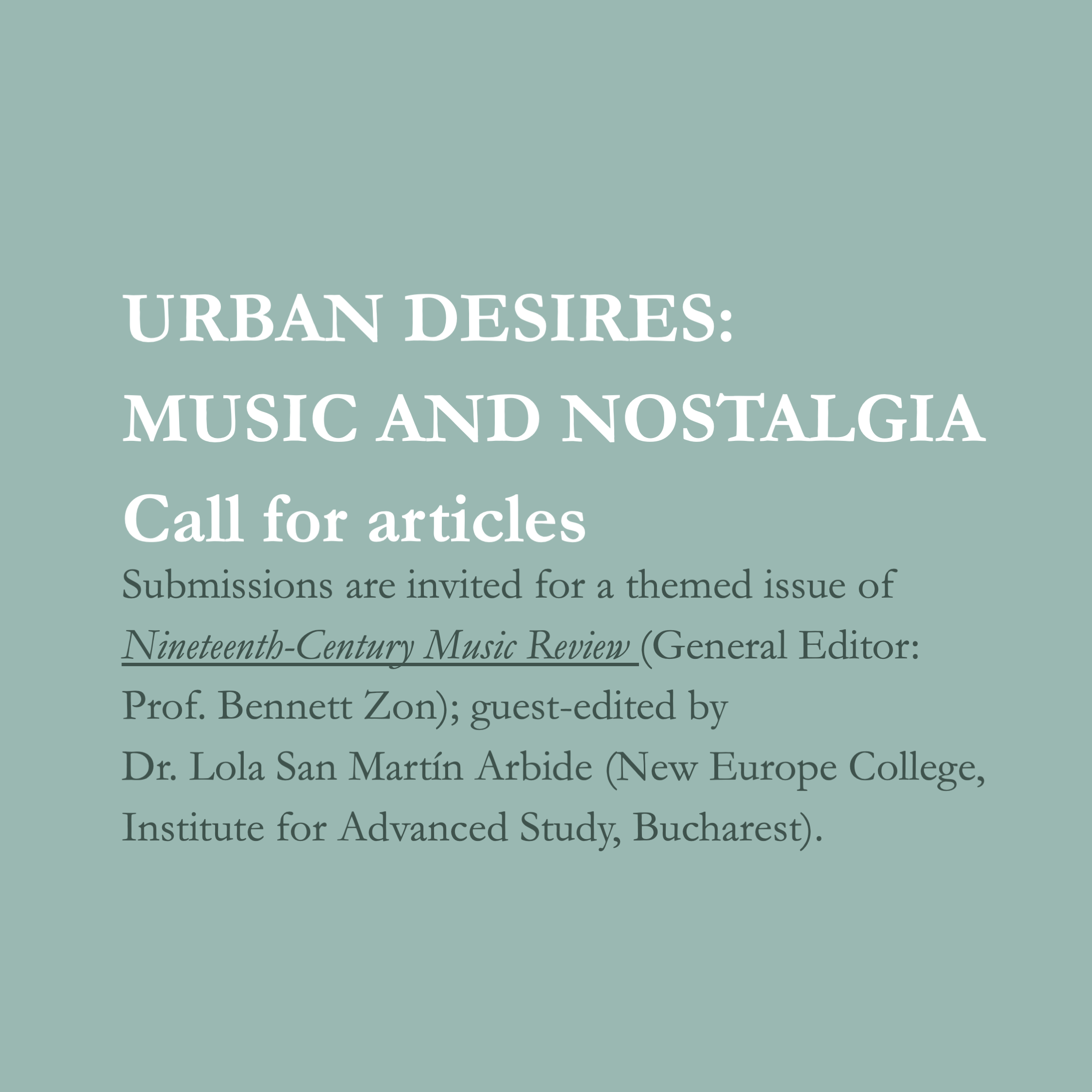 Deadline for 300-word abstract submission: 23 July 2021. Please, send your proposal including your name and title of the proposal to lolasanmartinarbide[at]gmail[dot]com. By 10 September 2021, authors will be notified whether they should submit a full version of their article for peer review.

Deadline for full article submission: 28 January 2022. Full drafts should be between 8,000 and 12,000 words (excluding footnotes). These articles will then go through the peer-review process outlined in the NCMR guidelines (https://www.cambridge.org/core/journals/nineteenth-century-music-review/information/instructions-contributors).

Deadline for final submission: The Guest Editor plans on submitting the full set and framing piece to the General Editor by 15 April 2022. After the peer-review process and approximately nine months after approval for publication, articles will appear online on the FirstView platform, and in hard-copy within two-calendar years.

Should you have any further questions about this special issue of NCMR, please contact the Guest Editor at lolasanmartinarbide[at]gmail[dot]com.

Nostalgia takes us back to the past and fosters desire for the future, it conflates joy, sadness, pain and pleasure, it allows us to forget and to remember. Critiqued by some as a reactionary impulse (Lowenthal 2015) and even as a dangerous emotion (Augé 2016), credited by others as a resource for creativity and progress (Tannock 1995; Keightley and Pickering 2012), nostalgia pathologically conflates reality and fantasy (Boym 2001). Nostalgia is not just a matter of time, it is also defined by the wish to return to the place of memory (Elliott 2010; Trigg 2012). The core question that this special issue addresses is: how did the musical repertoire of the long nineteenth century articulate a nostalgia for the cities of past eras, whether distant or recent?

Etymologically linking the concepts of return and pain, nostalgia has long provided the foundation for stories about homecoming. In the nineteenth century, nostalgia emerged as a modern pathos and, most importantly for this call, as an artistic topos. In this context, it remained inextricably linked to industrialization and urbanization. At the beginning of the century, the city had been a vantage point from where to reminisce about unspoiled nature. But later, modern urbanism —with its emphasis on progress, hygiene and reform— turned the old city into an endangered environment of its own. This special issue seeks to offer a new understanding, via musically grounded studies, of how the different intellectual, political and artistic movements of the nineteenth century —classicism, romanticism, nationalism, orientalism, historicism, modernism, among others— afforded individuals and societies with different strategies to feel at home. This call seeks articles that explain the role of music in providing these tendencies with a sense of place and —more specifically— that show how these musical places, real or imaginary, relate to the urban past.

Nineteenth-Century Music Review seeks contributions that explore the harmonies and discrepancies between history and memory studies (Huyssen 2003). What does nostalgia tell us about the construction of collective memory and identities? What kind of musical cartography does the study of musical cities unveil and how does it build on our knowledge of the geography of nostalgia (Bonnett 2016)? We also hope that the study of the paths of cultural transfer and nostalgic itineraries of different cities will nuance the eurocentrism behind the widespread belief that ‘Greece is where it all begun’ (Shohat and Stam 1994). Do nostalgic artefacts improve our capacity to better reconstruct the soundscapes and musicscapes of the pre-sound recording era? This call seeks submissions that intersect nostalgia, music and urban cultural studies from a wide methodological perspective and broad disciplinary grounds focusing on the long nineteenth century; the issue is not limited to any specific geographical area. Proposals may cover music in relationship to the one or more of themes in the following non-exhaustive list:

– Emotional atmospheres: the nostalgic sound/musicscape
– Nostalgia and nation-building processes
– Migration, displacement and longing
– Nostalgia as a seed for primitivism and orientalism
– Nostalgia, sentimentality and popular music
– Nostalgia as a concept of music criticism
– Creative nostalgia: reconstruction of urban sites/archeology of musical heritage
– Longing for a past that never happened/ landscapes  that never existed
– Reactionary nostalgia: protectionism and foreign  musical influence
– Cities and affective mapping: locating nostalgia in the inner psyche and in space and place
– Nostalgia and revolution
– Urban myths/city dreams
– The advent of modern leisure: travel and tourism
– Urban identities, hegemonic and contested
– The ‘old city’ narrative in music
– Class, gender and race: highbrow/lowbrow, gendered and xenophobic nostalgia
– Site-specific musical repertoire and memory
– Urban sites, ruins, and decadence: utopia, progress and nostalgia

The call is available here https://urbandesires.hcommons.org and a pdf version can be downloaded here: https://bit.ly/31RF30H.