The Spirit of Legislation: Agrarian Republican Reform Theory in the Enlightenment 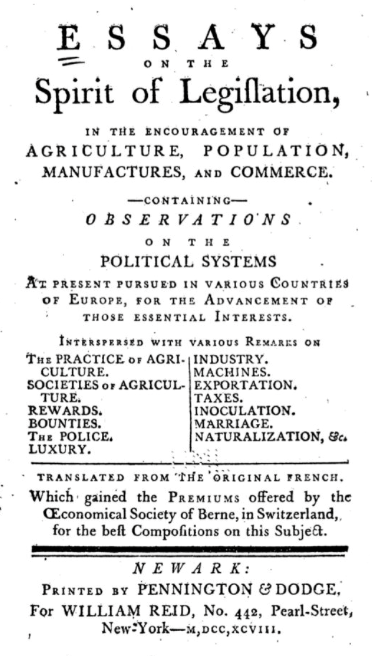 This workshop will discuss an ongoing research project based at the University of Lausanne, Enlightenment Agrarian Republics: From the Vaud to Poland and America (http://wp.unil.ch/agrarianrepublics). In 1762, two young Polish aristocrats, the brothers Michał and Jozef Mniszech, were sent to Switzerland to be educated by Elie Bertrand, the secretary of the Economic Society of Bern. The Mniszechs immediately sponsored a prize-essay competition, the result of which was one of the Economic Society’s most important publications, De l’Esprit de la Législation. This collection of prize-winning essays was translated into Italian, English and German and was read throughout Europe and in America. It provides an important window on eighteenth-century reform theory, particularly in relation to the economic ideas of Montesquieu, the French Physiocrats, the German Cameralists, Hume, Smith, and Malthus. The Mniszechs and Bertrand subsequently toured Europe, a trip which illuminates the practical concerns of reformers in Poland, Switzerland and the United States.

This event is part of a Swiss National Science Foundation research project, based at the University of Lausanne and titled Enlightenment Agrarian Republics: From the Vaud to Poland and America: (http://wp.unil.ch/agrarianrepublics)