‘Lords of the border marches’: Paramilitary mobilization, ethnic violence and nation-building in Anatolia and the Balkans during the European Civil War (1905-1949) 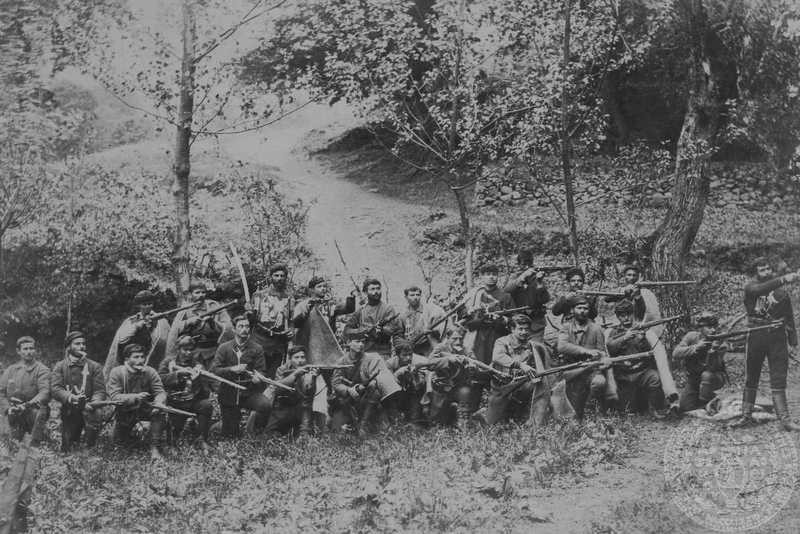 Paramilitary ‘ceta’ in the province of Bitola/Monastir (1907)

Why and under what conditions do states delegate their prerogative for violence to private actors? What motivates large numbers of individuals to join such groups and engage in violence? What meanings do they ascribe to their actions and practices? What is the impact of paramilitarism on the social and cultural structures of the societies afflicted by their violence? The workshop addresses these questions by providing an inter-disciplinary study of the social dynamics of paramilitarism in Anatolia and the Balkans during the ‘European Civil War’ (1905-1949).

The history of paramilitarism in Anatolia and the Balkans has been located firmly within a national context and analyzed as the product of specific ethnic culture and circumstances. Yet, as numerous studies of the early Ottoman period demonstrated the two areas constituted a continuous overlapping space of military mobility and cultural exchange. Political and religious ideas, military tactics and cultural tropes traversed constantly to and from the two areas with the help of inter-connected networks of migrants, artisans, clerics, mercenaries and merchants. The advent of nationalism in the early 19th century further enhanced connectedness ‘nationalism brought the two areas even closer together it initiated a time of mobility and encouraged a level of violence that was unprecedented in the two areas.

Techniques, methods and imaginings constantly crossed and re-crossed national barriers fostering a culture of clandestinity, extreme violence and radical rhetoric across the two areas. Paramilitary groups operated and moved within a transnational milieu of radical nationalists and revolutionaries where knowledge and tactics were widely diffused. Indeed, paramilitaries might have acted as the vanguard of the various nationalist projects however, their culture, tactics and modus operandi derived from a shared Late Ottoman culture of violence that was diffused across the different milieus and ethnic groups that inhabited Anatolia and the Balkans.

The presence and role of such ties challenges the idea of paramilitarism as the by-product of a specific national habitus and calls for a careful re-examination of the motivation of local actors, the processes whereby members of these transnational milieus were recruited into nationalist causes and became ethnicized as well as the impact of violence on the formation of new political communities in these diverse borderlands. The workshop addresses these issues by re-contextualizing paramilitarism within a broader transnational, longue durée perspective and exploring several key themes; recruitment and motivation, governance, repertoires of violence, that have been under-researched and under-theorized in the existing scholarship. Yet, our purpose is not to simply recount the story of a violent subset of men. Our intention is to use the story of the development and activities of local paramilitaries as a vantage point that would allow to question and reassess central assumptions about the relationship between paramilitary mobilization and state –building and address issues which are at the heart of ongoing debates about paramilitarism; the motivation of rank and file participants, variations in violence, the relationship between the state and the militias, and the role of paramilitary actors in formulating new political practices and constellations of governance.

Introductory Remarks:
Rethinking the violence of the state: Military enterprising and nation-building during the European Civil War

Franziska Anna ZAUGG, PhD, Post-Doctoral Researcher, University of Bern
Who will answer the call to violence? Paramilitarism in the Sandžak and Kosovo region during World War Two

Zeynep TÜRKYILMAZ, PhD, Research Fellow of Academy in Exile at Forum Transregionale Studien in Berlin
From firaris into cetes: The formation of Greek cetes of Pontus (1916-1919)

Spyros TSOUTSOUMPIS, PhD, New Europe College, Institute for Advanced Study Bucharest
Outlaws but not against the state: Paramilitarism and organized crime in the shadow of the Greek Civil War

Bandits to nation builders: Governance and cultures of war

John Paul NEWMAN, PhD, Associate Professor, Maynooth University
Twilight of the idols? Vectors of victory and defeat in Bulgarian and Serbian paramilitarism in the Interwar Period

James HORNCASTLE, PhD, Adjunct Professor, Simon Fraser University
Destroying a movement, building a nation: The events of 1924 and the founding of IMRO (United)

Dmitar TASIC, PhD, Researcher, Hradec Kralove University
Paramilitarization of veterans’ associations and their role in Serbia and Montenegro during the Second World War