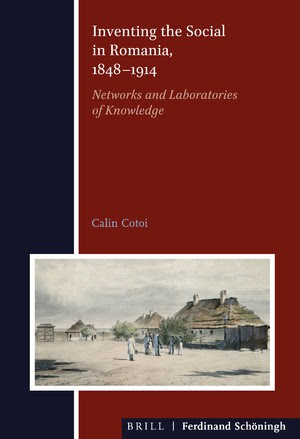 In Inventing the Social in Romania, Călin Cotoi brings to life several “obscure” anarchists, physicians, public hygienists, and reformers roaming the borderlands of Europe and Russia. The book follows individuals, texts, projects, sometimes even bacteria, traveling, meeting, colliding, writing, and talking to each other in surprising places, and on changing topics. All of them navigated the land, sometimes finding unexpected loopholes and shortcuts in it, and emerged in different and unexpected parts of the social, political, or geographical space. Using materials ranging from anarchists’ letters, to social-theoretical debates and medical treatises, Călin Cotoi points to the larger theoretical and historical issues involved in the local creation of the social, its historicity, and its representability.

Călin Cotoi holds a medical degree from the Faculty of Medicine, Cluj-Napoca, a BA in Sociology, and a PhD in philosophy. Professor at the University of Bucharest, Department of Sociology. Alumnus of Center for Advanced Studies Sofia, Collegium Budapest, New Europe College, Wissenschaftskolleg zu Berlin, and Woodrow Wilson Center. He has published in the areas of political anthropology, history of sciences, environmental sociology, and ethnicity studies.

Karl Hall is Associate Professor in the Department of History, Central European University. Trained at Harvard University as a historian of science, he has written primarily about Soviet physics, including the canonical Short Course of Landau and Lifshitz. With Michael D. Gordin and Alexei Kojevnikov he edited Intelligentsia Science: The Russian Century, 1860-1960. His research interests include industrial laboratories and tacit knowledge; intellectual property and patenting in Central and Eastern Europe; post-1945 transformations of East European scientific institutions; Western scientists as anthropologists and critics of the Soviet experiment; the history of the race concept in imperial Russia; national cultural historiographies of science in Czechoslovakia, Hungary, Poland, and Russia (as well as Austria and Germany) before 1945.

Adela Hîncu holds a PhD in Comparative History from Central European University. Her research is in the social and intellectual history of 20th century East Central Europe, and the history of the social sciences and social thought under state socialism in particular. With Victor Karady, she edited the volume Social Sciences in the “Other Europe” after 1945 (Budapest: Past Inc., 2018). Currently a New Europe College Fellow, she is turning her dissertation into a book, preliminary titled The “Social” in Socialist Romania: Marxism Humanism and Modern Expertise before 1989.

Silvia Marton is associate professor at the Faculty of Political Science, University of Bucharest. Her research is focused on history and politics of corruption, and on nation- and state-building in the 19th century. She is associate researcher at the Centre Norbert Elias, and alumna of New Europe College. She co-organizes (with Constanța Vintilă-Ghițulescu) the monthly focus-group “Political and Social History of the 18th and 19th century” at NEC, and is member of the CNRS-funded GDRI-network of social scientists and historians “Politics and corruption: history and sociology” (https://pock.hypotheses.org/).
For a complete list of publications, see: http://www.fspub.unibuc.ro/a/fspub.unibuc.ro/fspub/despre/profesori/marton-silvia